Diacritical marks disappear in Safari and Chrome on iOS

Kazunari Tsuboi Posts: 11
June 2020 edited June 2020 in Font Technology
This is my first time posting, so I'm a little nervous...

I am puzzled by unintended rendering results on iOS (both Safari and Chrome).
The diacritic at the beginning of the line disappears. 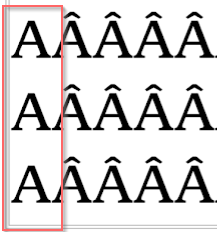 This font has the glyphs A(U+0041), Circumflex(U+0302) and Acircumflex(u+00C2).
All characters in the image are the same Acircumflex(U+00C2).
Created using AFDKO makeotf v2.7.11.
The TTF is displayed in a browser. I converted it to woff and got the same display result again.
I used the GSUB ccmp feature to break up the combined characters into base and diacritics.
The intent of this is to represent the multiple diacritics in a single glyph.
Is this a bug? Is it because I'm using ccmp incorrectly?
I would like to know some information that would help me understand shaping in iOS.
0