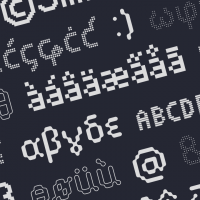 ValKalinic Posts: 34
February 2019 edited February 2019 in Type Design Critiques
Hi all,
I've been working on this idea I had about combining a strict grid with rules for radia; from a few specified ones, a radius is chosen based on the specific situation (end of stroke, lowercase curve, lowercase intersecting curve, uppercase curve, uppercase intersecting curve).
For example, look at m, B, or 8, and the multiple different radia occurring inside those single characters.

The goal of such a system would be creating an impression of precise industrial machine-etched type.

This is of course very much a work in progress and still early at that, please consider it as such. I will increase the weight difference between upper and lower case; some characters are not quite there yet; I have to think about the way MNVWXYZ fit in with the rest.

I've had to pause the work on this for two months and now I'm resuming it, so I thought it would be a good time to hear what advice or criticism someone more knowledgeable than myself could offer. Thank you.

Here are some current samples:

And a chunk of text: