Martin Silvertant Posts: 166
October 2014 in Lettering Critiques
I'm not sure this is the right category considering this is a logo and not strictly a typeface, but it's a logotype I'm designing with my Baran typeface (which is very far from finished) as starting point. Let me know if I ought to post this in a different category.

So I'm finally going to start selling some of my typefaces soon so I figured it might be a good idea to brand myself, particularly if I'm going to sell through MyFonts. Considering my last name is Silvertant I like the idea of calling my "foundry" Silvertype. Clear and simple. I usually like to involve some extra set of eyes as they always find kinks I missed. So feel free to give any criticism.

Here's an image of Baran and the beginning of the Silvertype logo: 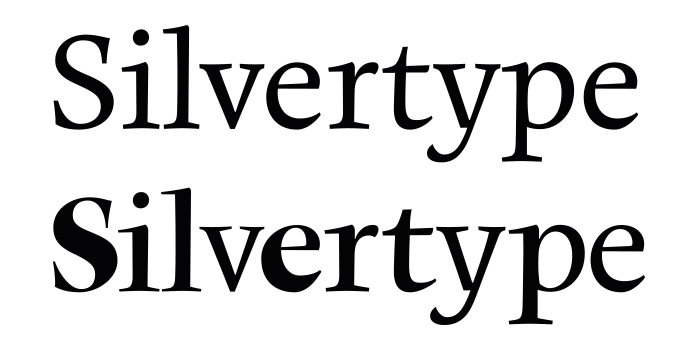 Here's the initial logo as I posted it on Typophile for feedback:

The members of Typophile made me realize I was designing a typeface rather than a logo; for a logo I ought to make the spacing much more consistent, and they're absolutely right. Here I did some adjustments:

As you can see in the last image there are some wacky things going on. For example, I was compensating for the white space underneath /r's shoulder by extending the terminal downwards. Not great. I made a t_y ligature to make the spacing more consistent, though I'm not happy with it so I'm open to suggestions. I tried simply shortening the bar in /t but it looked awkward. I was also still finding ways to fix that very obtrusive y_p combination.

This is where I'm at now:

The ball terminal of /r is better, but I think I will make it more rounded again, somewhere between what I had in image 2 and the current one. I was subtly emulating the diamond shape of the tittle in image 3 but it doesn't look right. I'm also not happy about i_l connecting. Craig Eliason commented there's a disconnect between the sharpness of the corners in /S and the rounded right side of the head serifs. I wanted to play with this contrast between sharp and rounded forms.