Scarbo — an attempt at a text face

Jan Pietkiewicz Posts: 17
July 2018 edited July 2018 in Type Design Critiques
It is with some trepidation that I submit my design for critique, since several of this forum's esteemed contributors  expressed some strong opinions about essentially derivative typefaces, superfluous rehashes of the old-style model, as well as beginners punching above their weight. I therefore feel obliged to preface this by saying that I am not a type designer and that I don't have type designer's education, perspective or ambitions. While working on my design I wasn't thinking in terms of innovation, self-expression or "cultural contribution". What I am is a moderately competent type user and all I wanted to achieve was a modest text typeface for my personal use which would have all the features I like and none of the features I don't. Even though I realize such aim might not be particularly laudable, I do hope it can be accepted as legitimate. 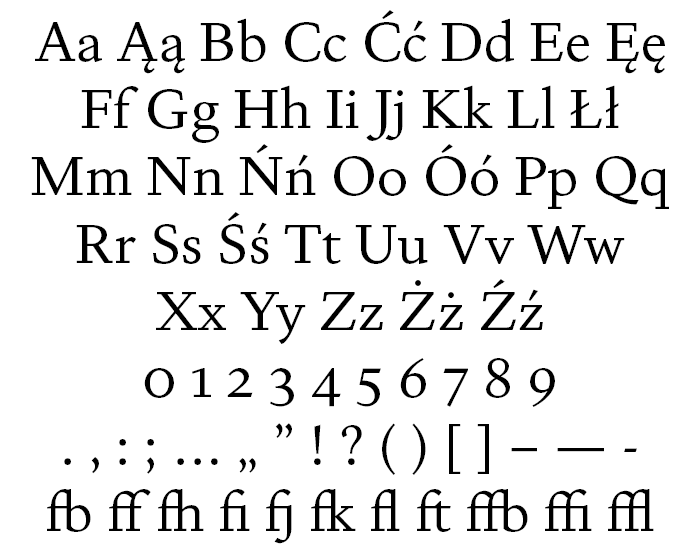 Scarbo (provisionally named after the sadistic dwarf from Bertrand's Gaspard de la Nuit) was conceived as a book typeface suitable for body text set at about 9 to 11 pt. Since the books I specifically designed it for may very well never be published, I can also imagine using it for correspondence, business cards and the like. At the present stage I was concerned only with the support for the Polish language.

I believe the design bears its influences on its sleeve, but I will enumerate them briefly. The roundness and generous width of the characters, together with the elongated, flat-ended ascenders and descenders were derived from the family of faces inspired by Griffo's type (Bembo, Dante, Iowan Old Style etc.). Since literal Renaissance revival was not my goal, I turned to Plantin and Times for several more "contemporary" (by the way of the early 20th century) letterforms, including the large-bowled /a and large-eyed /e, as well as several other glyphs (e.g. the /?). While the use of slab serifs places my typeface in the tradition of Joanna, Whitman and Scala, I wanted the effect to remain subtle, coming off almost as an afterthought; Štorm's Jannon 10 provided the initial impulse.

One of my main goals was to arrive at a streamlined, smoothed out and slightly generic look. I wanted to avoid any too-obvious vestiges of handwriting (beyond the broad-nibbed terminals). Whenever possible, I went for the simplest or even "naïve" letterforms: /k's and /K's arms and legs meet at the stem, /M has parallel stems, /R – a straight leg, and both /w and /W – only two serifs.

The only eccentricity of Scarbo that isn't a result of my lack of skill but rather of a conscious decision is the use of angled serifs at places where most humanist slab serif designs would have straight vertical ones, namely /C, /E, /G, /L, /s, /S, /z and /Z. This decision was partly dictated by the fact that angled serifs in /s and /z play together much more nicely in Polish digraphs c_z, r_z and s_z:

At the current stage the font is spaced (using Frank Blokland's cadence method with some ad-hoc modifications) but unkerned. I plan to add small caps at some point, but first I'd like to make sure whether the uppercase is at all acceptable. I also have a vague vision for the italics, but I'm afraid it will be quite some time before I arrive at anything substantial.

Since I lack the benefit of formal type design education, mentors or even type-savvy acquaintances, I would be eternally grateful for any comment or advice on my design. As this is my first project of this sort, I feel rather uncertain about virtually all aspects of it, from the proportions and contrast down to the shapes of individual letters. The glyphs that are a particular source of concern for me at the moment are the /s, /S, /T, /Z, /z, /3 and /5.

Thank you in advance for any help or opinion!
Lastly, because I believe it is incumbent on a dwarf clumsily trying to climb onto the shoulders of giants to at least acknowledge the names of said giants, I would like to list the typefaces that to the greatest extent have influenced my decisions when working on Scarbo. Even if it wasn't my intention to replicate any of them in particular, their aspects inform my idea of what constitutes a good text font and it would be remiss of me not to mention them here:
Adobe Text, Alia JY, Aragon, Bembo, Concorde, Dante, Erato, Fournier, Berthold Garamond, Iowan Old Style, Jannon 10, Joanna, Kings Caslon, Logica, Lyon, Minion, Plantin, Poynter, Rawlinson, Rotation, Sabon, Sabon Next, Scala, Times Ten, MVB Verdigris, Whitman, Yale
scarbo-20180729.pdf 49.9K
Tagged:
1