Gryffensee, the “Futura” of blackletter

Christian Thalmann Posts: 1,518
March 2013 in Type Design Critiques
Here's my most recent project, a textura blackletter typeface built from a limited inventory of straight segments and circular arcs of consistent weight, with exclusively orthonormal or diagonal cuts. I'm aiming for a "geometric sans" among blackletters.

The project was inspired by the letters |ABCD| hand-painted by Sasha Prood in what seemed to be a geometric blackletter. I later found out he drew these letters from an existing font, Bastard by Jonathan Barnbrook. Luckily, my own rendition of the concept had taken on a life of its own by then, and had turned out very different from Barnbrook's approach. I used Wilhelm Klingspor Gotisch as my main reference for blackletter shapes.

Since some traditional blackletter letterforms can be hard to parse for modern readers — in particular the capitals —, I made more legible alternate forms for |AGHIKZ|. They can be accessed through the Stylistic Set 01 in the main font, and I intend to release a companion font in which these forms replace the default forms for easier use. 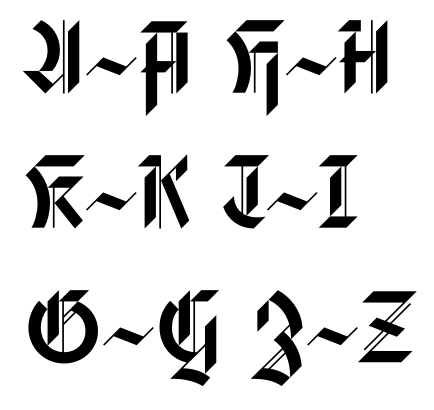 Here are some PDF specimens:

I intend to release the font soon, unless there are issues remaining that would call for a major overhaul.