Johannes Neumeier Posts: 327
October 2020 in Font Technology
Hey all,
a question about the MS renderer.
I’m debugging an Arabic font, and in the sequence رّكك the Shadda on the final Reh “moves” with the kerning between final Reh and initial Kaf. By "moving" I mean as I type Reh + Shadda the mark is placed correctly, but as I continue to type Kaf the kerning between Reh and Kaf is applied, but the Shadda gets "pushed to the right" by as much as Reh and Kaf are (negatively) kerned.
Here a couple of fonts in Microsoft Word for Mac 16.16.5; the bottom one being the font I'm debugging. 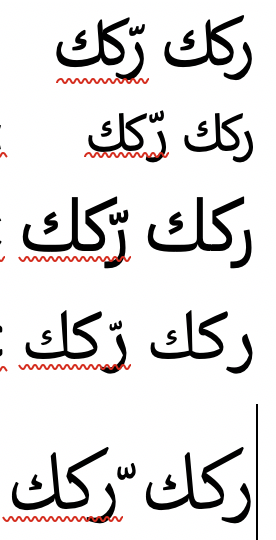