LeMo aka PatternMan aka Frank E Blokland Posts: 686
October 2014 edited October 2014 in Education
Those who are familiar with my PhD research know that I investigate Renaissance systematization in type. The underlying hypothesis is that Gutenberg and consorts developed a standardized and unitized system for ‘designing’ and casting Textura type, and that this system was extrapolated for roman (and later italic) type. Humanistic handwriting was literally molded into pre-ﬁxed standardized proportions. 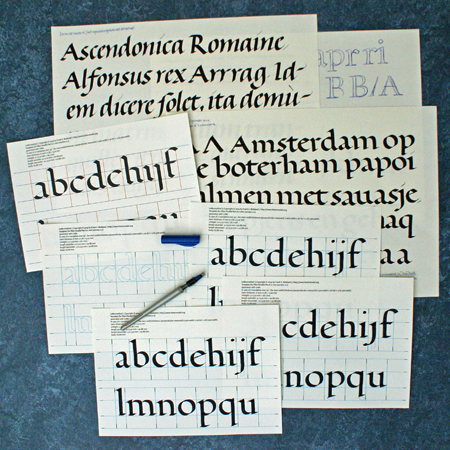 In line with my predecessor and tutor at the KABK, Gerrit Noordzij, I consider writing a good starting point for exploring matters like construction, contrast-sort, contrast-ﬂow, and contrast. Translating handwriting into type is not very straightforward though. Despite the fact that they are trained to work directly from their own writings, students often start to deﬁne grids before drawing letters. And usually they look at existing typefaces for the ‘correct’ proportions. Obviously patterning is a requirement for designing type and it is difﬁcult to distill these patterns from handwriting. Could it be possible that type also ﬁnd its origin in patterning besides in writing, and that this even inﬂuenced writing after the invention of movable type?

There seems to be no Humanistic handwriting predating movable type that shows such a clear standardization as roman type. My measurements of incunabula seem to prove that character widths were standardized during the Renaissance. The written Textura Quadrata made it relatively easy for Gutenberg and consorts to standardize and systematize their movable Gothic type. When this was accomplished, it was obvious to apply the same system to the new roman type (and decades later to italic type). The clear morphological relationship between Textura and Humanistic Minuscule made this possible.

The underlying structure of Textura Quadrata and Humanistic Minuscule made an organic standardization of the handwritten models possible. It was there all the time, but it wasn’t necessary to capture it so literally before movable type was produced. Also side bearings were a natural extension of the handwritten model. This standardization is captured in the DTL LetterModel (LeMo) application. 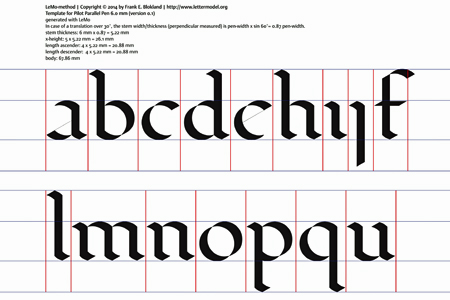 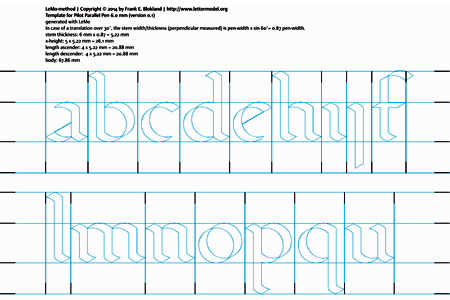 As mentioned, the step from handwriting to type design is difficult. Even for me as an experienced calligrapher. I set up a calligraphy course for the Dutch television and wrote a book for it end of the 1980s. Noordzij was very positive about it in Letterletter 12 (June 1991): ‘Frank Blokland has succeeded in bringing the literature on calligraphy on a higher level; his book makes better reading and is a more reliable guide than any other book on the subject.’
The question is, how to combine the outcomes of my measurements with calligraphy in type education. Well, one can make a template with LeMo, like this one for a Pilot Parallel Pen 6 mm. In case of a translation over 30º, the stem thickness is pen-width x sin 60º = 0.87. The x-height here is ﬁve times the stem thickness; approximating what I measured in Jenson’s type. 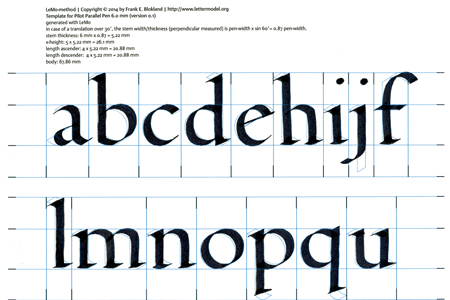 Next one can use the template for tracing with a broad nib, trying to apply subtle details. The outcome can be auto-traced and converted into a font. As mentioned, spacing is part of the system, so the letters should form words automatically. 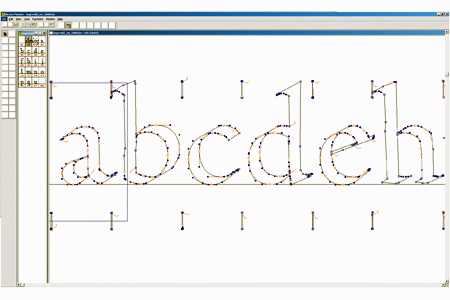 This basis can be used for further formalization and refinement. For digital type it is not necessary to standardize widths, of course. This clearly is different from what IMHO was required in the practice of the Renaissance punch cutter.