Peter Baker Posts: 148
December 2022 in Type Design Software
With apologies for a long post, I’d like to invite anyone interested in TrueType hinting to take a look at an app I’ve been working on for the last few months. Called YGT (don’t ask), it’s a graphical editor somewhat like others I’ve used, but addressing my own wants and concerns about existing tools. To wit:
YGT does considerably less than VTT, but that’s the point, in a way. Contemporary fonts can be hinted much more lightly than they were twenty years ago: YGT is designed around the things that are required now, and both its GUI and its file format are streamlined by concentrating on just those things. But YGT works well with variable fonts: you can create and edit the cvar table and preview the font’s different instances.
Here’s a screenshot of the main window plus a Font View window, used for navigation and also showing which glyphs have been hinted (they’re highlighted in blue). In the main window, the hint editor is on the right (with tools up above), YAML source in the center text pane, and a preview on the left. The editor for this glyph shows the familiar anchors and arrows of other editors, plus a macro call for the glyph’s cupped serif. 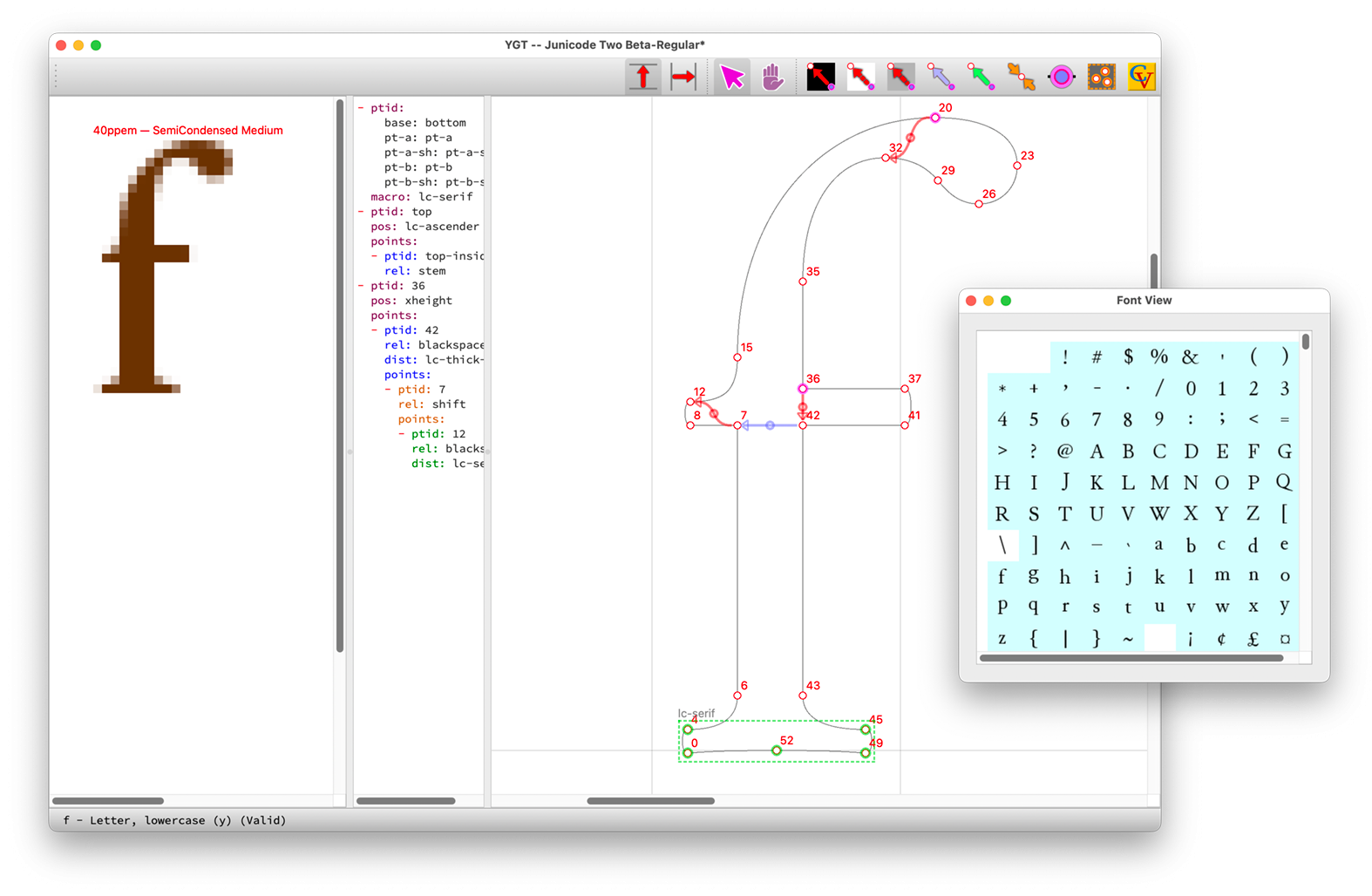 YGT is far from finished. The preview (by FreeType) is primitive: I need to supply a grid and perhaps an outline, figure out subpixel rendering, and find a better way to feed FreeType a glyph to display (the procedure right now is slow and clunky). There’s no undo/redo yet. No deltas yet. No preliminary autohinting. I need better interfaces for editing control values and other stuff. I’m an amateur programmer, and I suspect that my code is often amateurish and inefficient, with plenty of things needing improvement or tidying

I’d like to hear from anyone who thinks this project is worthwhile. What features do you absolutely have to have in an app like this? What features look superfluous or badly implemented? This is an Open Source project, and I welcome contributions, especially from people who know more about GUI design than I do, or are more familiar than I am with Qt, fontTools, and FreeType. All contributors will be gratefully acknowledged and, where appropriate, added to the list of authors.

YGT is here: https://github.com/psb1558/ygt. It’s not on PyPi yet: installation instructions are at the site. If you find yourself actually using it, save often. This program is young, and while it is way more stable than it was a month ago (I’ve used it for hours at a stretch and hinted 2000+ glyphs with it), I can’t guarantee that it will never crash.