Hello everybody,
I would like to aks for a help. I'm starting to set up this rounded geometric variable font and I'm bit struggling with those "smooth to sharp" transitions. After some trials and errors I have found this somehow working approach. But I am not really sure whether this is the optimal solution. Have you ever tried to interpolate anything similar yet?

Note: I would like to have just 2 masters (Thin and Heavy), at least at this early designing stage (if possible)
I have some problems and few questions: 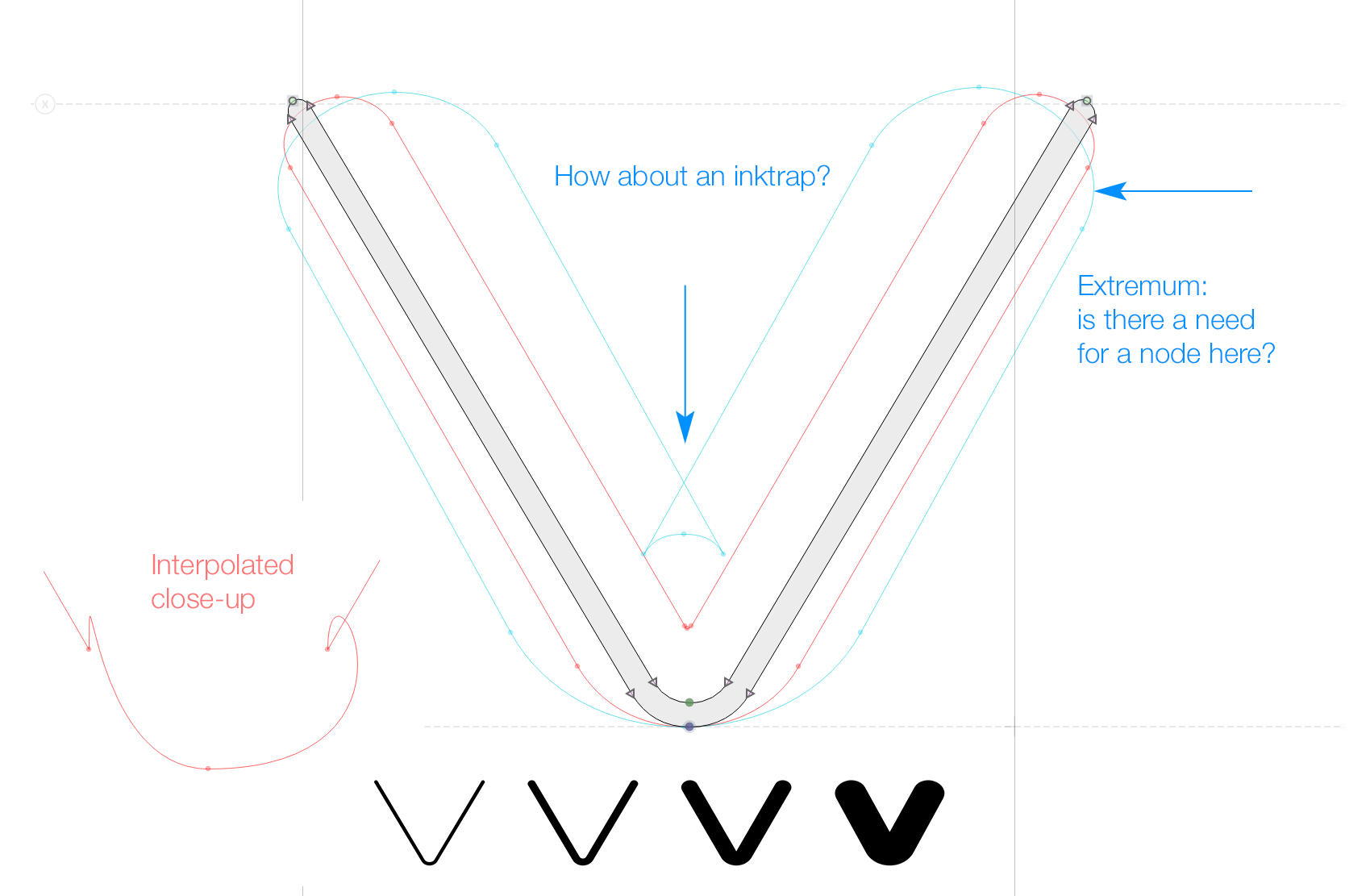 1) Interpolation
Do you find this scheme working and OK? Or Would you perhaps suggest some completelly different approach?

2) Kinks
There are those weird kinks at transition, where the handles flip their positions (from outward to inward)
Actually, I have finetuned the master curves later on and it is much better now than on the preview.
But it is still quite a problematic part (just a bit exagerated here)
This "slight" problem shows up just around somewhere between 430-485 (on the range of 100-900) .
I am also thinking of doubling precision to UPM 2000, which could help too (please see the point 4)

3) Inktraps
This approach does not solve inktraps at all - what if I need them? And should I need them?
(I mean the short horizontal line at the cusp)
I've done some research and it differs a lot:
Some renowned fonts do not have them (at such details like the inner corners of AVX) - Helvetica Now, Futura Now
Others do - Eurostile Next, TT Lakes Neue.
To be honest, I don't see much benefit of it, unless the font is ment to be optimised for very small sizes or is condensed a lot - what do you think?

4) Nodes at extremes
I am aware of the "nodes at extremes" rule - but I guess they would be quite redundant right here, right?
At least, I have seen many fonts not having extremas at this particular situations/places.
(I'm talking just about diagonals like this, not the other letters like O, where I'm pretty sure they really need to be)
Not having them will make everything much easier and cleaner.
Could the missing extrema make some "real" problems? (other than hinting, perhaps)

5) UPM
How do you feel about doubling precision by designing in let's  say 2000 UPM (2048, or even 3333 as some do)?
Would you recommend it or not?
Or perhaps the use of decimal coordinates?
I have noticed that 2000 UPM should be a standard for VFs at Google fonts now.
There are lots of discussion on this topic, but I'm stil missing some "ultimate" answer.

I would really appreciate your expertise - I would rather make all those important decisions at the beginning of the process than later on.