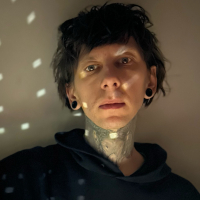 Michael Rafailyk Posts: 90
August 2022 in Font Technology
Just did proof kerning and accidentally typed a Cyrillic letter in a Latin context. I was suprised and found out that kerning don't work between different scripts in some applications on macOS. Looks like macOS text shaping engine (?) splits text into blocks between scripts, and these blocks do not interact with each other.

TextEdit, Safari, Firefox, Chrome show the same result as in the image below, and just Adobe applications applied kerning as expected in all three cases. The font on the image shared classes between Latin and Cyrillic characters with the same shape.

Testers call this a negative scenario testing that is, something that the user most likely won't do, and in a normal situation, the user will not mix different scripts within the same word. But I would be glad if someone could shed some light on whether this is considered normal behavior of the text engine, and what are the cases where different scripts can be mixed in one word?
Tagged:
0