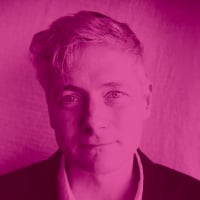 I’ve been using the terms ultramodern and hypermodern to define typefaces, but I don’t believe there is agreement on how they should be used. I was hoping to get some feedback on these terms and the typefaces that fit under them. The term “techno” is frequently used as a catch-all, but I believe it’s too broad.

The adjective “modern” is ineffective when applied to typefaces in this way since it is not synonymous with "modern" in other types of design. Futura’s forms align with modern the way the term is used in architecture, but modern fonts are Bodoni/Didot. We usually categorize Futura as a geometric-sans, or geometric-grotesque. I'm not sure if that's a retronym for Futura because I never heard the term until the early 2000s. How was it classified before?

Ultramodern typefaces usually have less focus on pure circle forms and often use consumer electronics themes shapes to emphasize a more industrial structure. Industrial stovepipe typeface existed before Microgramma/Eurostile but there was always a traditional flavor, Bank Gothic being a notable example. I'll try to keep out of the weeds here because I discussed it in another post. Eurostile had superelliptical shapes resembling contemporary high-tech devices: the cathode ray tube. It appeared to be intended to minimize the impression of a pen stroke. Eurostile’s design avoided classical typeface forms to portray the sensation of high technology. In the 1970s there was E+F Digital Sans, Handel Gothic, and Earth which took the Eurostile idea and simplified it further while placing more emphasis on modularity. One particularly stark example is the old Namco logo. In these examples, the industrial shapes convey a sense of precision while appearing to be functional.

A hypermodern typeface takes the ultramodern style and loops it back into something that draws attention to its own high-tech nature. It’s post-modern maximalism; ultramodern shapes amplified in a computerized kaleidoscope to make them more exciting, more interesting to add maximum emphasis to technological aesthetic. Letterforms become distorted to further distance them from classical letterforms. Modularity is exaggerated to further dehumanize, suggesting some unknown electromechanical system or alien technical requirement. There may be notches, chopped corners and unusual stencil struts to create the impression of panels or unfamiliar technical constraints. They can be curvy like Cyberotica, but inorganic, communicating a sense of complete artificiality. The earliest hypermodern example I know is Westminster (Data ’70, Moore Computer) which was based on magnetic ink machine readable numerals developed in the 1950s. This concept was pushed to the limits of legibility in the 1990s by The Designers Republic. One of my favorite examples is the title for the original Wipeout game on PlayStation in 1995. They subverted the idea of LCD digits being comprised of an 8 with missing segments by using a Eurostile 8 and chopping it up to produce letters. Here's a recent hypermodern typeface I made.

Hypermodern typefaces usually fall under the terms “decorative” or “sans serif”. I think we can consider this style as established—it has been around for over half a century. I think one of the reasons these typeface designs are not taken seriously is that designers have relegated them to science fiction roles. I’ve seen layouts from the 1960s where Westminster was juxtaposed with mod fashion and Data ’70 paired with psychedelia and jazz. Now they’re mostly used for EDM or videogames involving robots and spaceships. What are your thoughts? Do you think these terms fit?