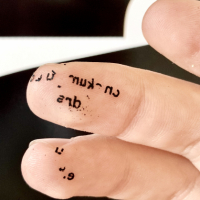 Michal Chrastina Posts: 3
February 2 in Font Technology
Is there any argument against using the same code for switching glyphs in two features (rvrn and rlig)?
To be clear I am using this kind of substitution only on default (currency) glyphs, so rvrn should not cause problems (if I understand this argument correctly).
I wanted to use just rlig, but unfortunately, Adobe Illustraotor seems to ignore rlig right now.
0