After playing with letters for years, here's my first serious attempt at type design - Advices? 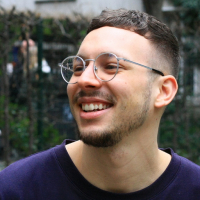 This is my first post in this amazing forum, I've been reading all of you for a while with hearth-shaped eyes

As I've written in the title, I finally started dipping into this obsession for bezier curves in a more serious way and I wanted to share with you the fruits of my first carpal tunnel

Here's "Bianpesanolairo" - I'm joking this isn't the name of my the font, It's just a random word with some of the letters I created. (PDF attached!)

I would like to achieve a defined contrast between the circle-shaped letter and.. the others. Big x-height, curvy letters and a generally upbeat character.

My questions would be:
- Is it just me or the /e looks a bit out of place?
- Do you think there's something wrong with the /a and /s ?
- Do you know of any font similar to what I'm creating where I could take inspiration?

Any critique, advice, insult or appreciation is super welcome! Thank you in advance