Z and 7 with a stroke 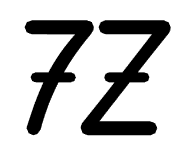 What do you think of adding a bar to the waist of Z and 7? Quaint or not?
0