Sculptural Beauty: an invitation to participate

LeMo aka PatternMan aka Frank E Blokland Posts: 663
January 2020 edited January 2020 in Font Technology
While working on type I sometimes take screenshots because I am intrigued by the image on the monitor. The layout of windows, details in the Bézier curves, the combination of colors, or even the ﬁle structure can –unintentionally– produce beautiful pictures. Most of these pictures are not saved and therefore evaporate: after all, one cannot capture everything. Consequently, quite a bit of the beauty of the type-sculpting process will only be for the sculptor’s eye and will remain unseen by third parties. 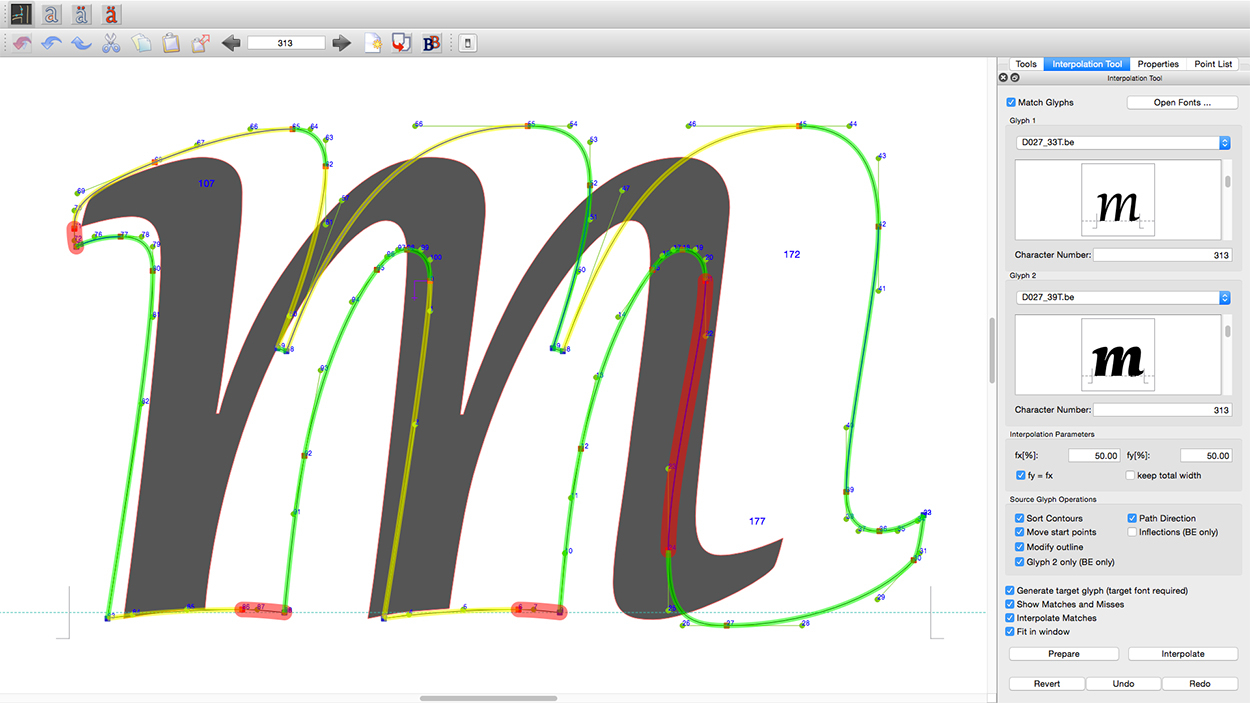 Although this is just speculation, one can imagine that illustrious punchcutters such as Nicolas Jenson, Francesco Griffo, Robert Granjon, Claude Garamont, and Johann Michael Fleischmann –to name just a few– must have known familiar moments when they were satisﬁed, enthusiastic, or even proud of what they saw through their magnifying glass as they worked on type. Unfortunately it was not possible to make ‘screenshots’ to share and document this. That would have resulted in a kind of kaleidoscopic overview with patterns and series of elements from the past.
Nowadays, type designers and font producers can use many different font tools/editors and add their own functionality through scripting. If we would put all the screens together, we would see an abundance of shapes, structures, and colors. This would result in a more or less overall picture of our time. If we saved and collected these snapshots, that would give a unique insight into the production processes of fonts from the early 21st century. Moreover, it would also result in an æsthetically attractive coffee-table book, for example with the title Sculptural Beauty.
Today’s increasing environmental problems are hard to ignore. The type designer and font producer’s business is more successful than ever before, thanks to innovative computer and printing technology and, of course, globalization. The increasing exchange of information forms the basis for the success of the graphic design profession with typedesign in its wake. Unfortunately, the reasons for the success cannot be viewed separately from the pollution of the earth.
The aforementioned coffee-table book could not only save snapshots of the digital font production processes, but could also be used to somewhat counteract the environmental problems. Undoubtedly, not printing the book would not put extra pressure on the environment. However, the revenues from the book can be used to support an organization or institute that, for example, tries to clean the oceans, or helps to preserve or save forests such as in Australia.
My suggestion is that together we create the book by making screenshots of our font-production processes. The total number of images, i.e., pages, must be between 300 and 400. The format would be something like A4 landscape with a hardcover. The production costs of the book must be borne by the participants, who have to pay around $ 25 per page. A maximum number of pages per participant may need to be set based on the offers. I think it would be appropriate to print the book digitally. This also offers the possibility to produce it in small quantities, depending on demand, at different locations in the world. After all, the closer it is produced to customers, the lower the transport pressure on the environment.
Apart from the images, the book must contain a foreword and a mention at the back of the participants, the font tools, and hardware that they used when the screenshots were made. I would rather see the overall design and the associated organization handled by graphic-design students. Maybe an ad-hoc publishing company should be established for the occasion. How the project, including distribution and necessary administration, must be organized, remains to be seen. If it were supported by a few major players in the profession, that would, of course, be great.
Because the production costs are borne by the participants, the proﬁt per book can be considerable. A retail price around $ 30 should make it attractive for a relatively large audience. It would be a great gift for Christmas 2020, I reckon. Perhaps as an incentive, we should think about making a kaleidoscope using digital-type based scripting.
Tagged:
3