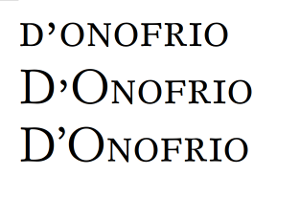 And here is the problem: where I have a text in small caps, but with capital letters (second line of the image; in LaTeX, for example, <\textsc{D'Onofrio}>, but the same thing happens with the option <:smcp> in OpenOffice) , the <quoteright.sc> is also used between capital letters, while in this specific case I would like it to be "normal" or "capital" (as in the third line of the image).
I thought about creating this code:
and
The trouble is that it doesn't work

I don't know if it depends on the fact that the system also means capital letters as small caps and therefore does not apply the rule, or if my approach is completely wrong...
0