Jacob Casal Posts: 99
May 2019 in History of Typography
I’ve known about this for one or two years now, and intend to include it in my design of Didot from this period, but I thought it would be neat to share this small nook in type history with you all now.
I’m sure many of you are familiar with the later Greek typeface by Didot. An example in Hymne d'Aristote à la vertu: essai d'un caractère grec (1832): 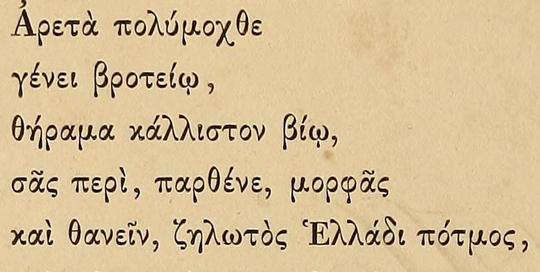 I have relied mainly upon three Didot manuscripts (a set of three volumes, 1789–1790) for my design, and early on while looking through some of the footnotes I came across this in the third volume (1790):

Three instances of Greek, distinct from the later design shown previously. As I have been parsing through many other Didot manuscripts, this is still the only instance I have seen it used. Before talking about it more I’ll share with you an instance of Greek from the footnote of an introductory letter in the first volume (1789) and another instance from the same letter from when it was first published in 1784, in that order:

I’m not entirely sure if the Greek shown in 1784 and 1789 are a| a very early experiment by Didot b| a design from someone working with the Didots, or c| a general design available to printers of the time. But what held my attention was the 1790 design. I know there is talk about latinizing other scripts, but one thing I have grown to respect in Didot’s typefaces is how he was able to harmonize his designs across languages.
Is it rough in places, yes, but I do like it. Let’s get into some of the interesting features. Look at that /omicron and how he differentiated it from the Latin /o with the little terminal cutting into it, giving it a bit of a top-of-a-fruit look. The /ζ doesn’t have a hook at the bottom, appearing to end in a teardrop terminal. The /α reminds me of how he handled his italic /x. The x-height also seems to be equal with the Latin type, where it is slightly smaller later on. On a different branch, refined on its own, separate from the very beautiful Greek we see later, I think it could be made even more a group of beautiful letters in its own right.
But what are your thoughts on it? Is it heresy against Greek type design or a lovely bit of Greek type, or anything in between?
Tagged:
1
«12»