Yeshurun Kubi Posts: 14
December 2018 edited December 2018 in Font Technology
On Hebrew there is a need for another mark on the unicode, but there no formal unicode for it.
Actually this need is more like a stylish need, cause it not a new form - just the same form that notes the way of pronouncing it on a context condition.
For example: the 'a' letter sounds different at the word 'car' and at the word 'cat'. So i have made a spacial 'a' to note the reader that on the word 'cat' is sounds more like an 'e': 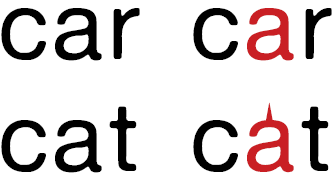 This is not a real example, just a way of looking to understand this thing on Hebrew.
The Unicode.org did that on Hebrew for the standard mark QAMATZ [sounds like 'a'] adding Qamats Qatan [sounds like 'o'] - and really it is just a stylish different and not real new mark form:

On the Unicode.org:
05B8 ◌ָ HEBREW POINT QAMATS
used generically or as qamats gadol in orthography which distinguishes that from qamats qatan
05C7 ◌ׇ hebrew point qamats qatan
But there is another two marks that have the same need:
For the foraml SHEVA [u+05B0] there is a need for SHEVA NA - to note that it sounds like 'e'.

And i have found a letter to the Unicode.org asking them to do so.
The second is for the formal DAGESH [u+05BC] there is a need for DAGESH HAZAQ to note that it sounds more 'strong'.

My question is what should font designers do meanwhile - as long as there is no formal unicode for it?
It it not good just putting it on Private Area category, cause it will not get the LTR bidi direction.

One most appreciated font designer for Hebrew made a 'liga' feature that replaces a sequence of two SHEVA marks to SHEVA NA that he designed on the General Punctuation category [at U+200C that formaly is Zero Width Non-Joiner].
So it looks not like the right way of doing it.

I thought that the proper way for that is putting it on the Private Area category, and applying a Swash [swsh] feature for it.

So... what to you say what is the best way of doing it?