LeMo aka PatternMan aka Frank E Blokland Posts: 663
November 2018 in Font Technology
The previous retail version (6.3) of DTL OTMaster was released back in the spring of 2016. A lot of functionality has been added since, especially developed for the internal font production at URW Type Foundry and the Dutch Type Library. The current OTM version is already 7.9 and an overview of the extensive new functionality can be found below.

The initial idea was that version 8 would be the next retail version. However, the conversion from OTF to TTF and vice versa, the handling of the UFO 3 format, and the development of the updated manual takes a bit longer than planned. Especially since the TYPO Labs conference in Berlin last April, we received quite a number of requests for a new OTM version. Therefore we have decided to release version 7.9 ﬁrst. Consequently this version comes without the OTF to TTF conversion, UFO 3 support, and without an updated manual.

However, because of these limitations we lowered the price for OTM 7.9 to €199 instead of the standard €255: please note this is a one-time-only discount. Owners of version 7.9 will be able to upgrade to version 8 (scheduled for the ﬁrst half of 2019) for only €25. An upgrade from older versions, for example 6.3, to version 7.9 costs €50.

OTM 7.9 is available for macOS, Windows, and Linux. The macOS version has not been notarized by Apple for Gatekeeper yet: consequently, when starting OTMaster for the ﬁrst time, the right-mouse button (or <cntrl> + click) has to be pressed to open the application. Of course, alternatively the settings for allowed downloaded apps in the ‘Security & Privacy’ section of the System Preferences can be changed.

OTM 7.9 is available from Glyphs GmbH, FontLab Ltd., and DTL. 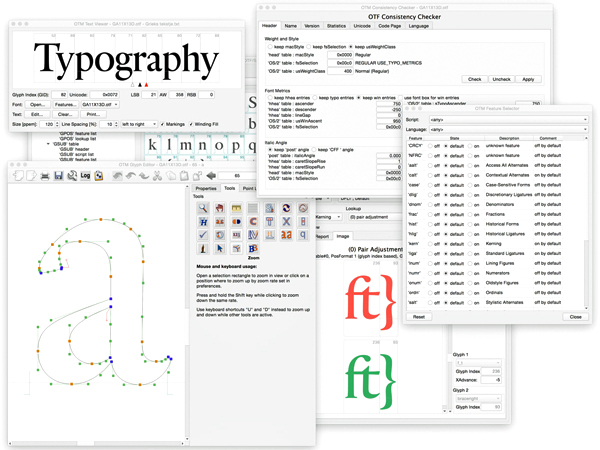 4. Side By Side Viewer:
– Print
– Variation-instances
– Isomorphic glyphs, or non-isomorphic only
– Different total width only