Does this frac implementation actually work?

Severin Meyer Posts: 10
October 2016 in Technique and Theory
I realize that I'm late to the party on this subject. Tal Leming's Fraction Fever 2 implementation of the frac feature has opened my eyes about the capabilities of OpenType. As a fun challenge, I have subsequently experimented with an alternative approach to this feature, and here is what I came up with:

It offers the same functionality as Fraction Fever 2, but has a few potential advantages. For one, it can process fractions of arbitrary length. As a result, incomplete or incorrect replacements are avoided more reliably. At the same time, it adds only about a third as many bytes to a font.

Based on initial tests, it appears to work as intended. But of course, I value the opinion of any interested expert, who might be able to point out a fatal flaw in my approach. 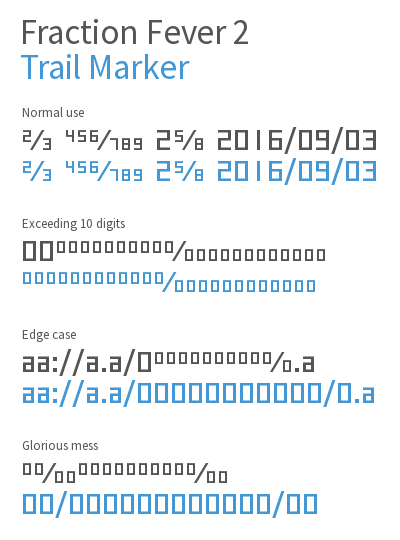