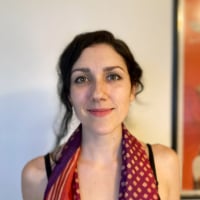 I've been wondering... has anyone developed/seen a non-Arabic connecting-script typeface (Devanagari, Bengali, Latin scripts, etc...) that uses a kashida-like function to elongate the connecting space between letters?

For those who don't know what I'm referring to, here's an example of some Arabic text in which the tatweel glyph is added in between other glyphs in order to "stretch out" the word, rather than stretching the space in-between words.

I know that some Devanagari and Bengali typeface designers have included a tatweel-like glyph that represents a horizontal section of "headline"/shirorekha. I always assumed that these were intended for designers to insert manually, but has anyone written a feature to have these automatically insert and extend when someone tracks out a word? Is that even possible?

I have a feeling that @John Hudson knows the answer to this question, at least

Edit:
I guess, more succinctly, what I should be asking is... has anyone in the past few years been able to figure out a way to avoid this from happening?

Or are we still years away from being able to track out connecting scripts?